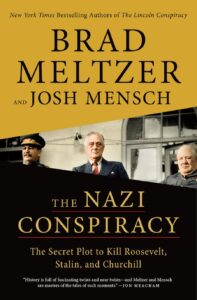 The Secret Plot to Kill Roosevelt, Stalin, and Churchill

Brad Meltzer’s books are full of twist and turns, intriguing characters, and little known historical details. And it’s those delicious details that make The Nazi Conspiracy: The Secret Plot to Kill Roosevelt, Stalin, and Churchill so compelling.

Brad shares how he discovered this true Nazi assasination plot that, had it not been thwarted, would have changed the world. We discuss what surprised him most during his research, how this part of history informs today’s landscape, why Brad says we need to feel uncomfortable, and much more.

BRAD MELTZER is the #1 New York Times bestselling author of The Lightning Rod, The Escape Artist, and over ten other bestselling thrillers, as well as the Ordinary People Change the World series. He is also the host of the History Channel TV shows “Brad Meltzer’s Decoded” and “Brad Meltzer’s Lost History,” which he used to help find the missing 9/11 flag that the firefighters raised at Ground Zero. Brad coauthored The Nazi Conspiracy: The Secret Plot to Kill Roosevelt, Stalin, and Churchill with JOSH MENSCH – a bestselling author and award-winning TV documentary producer.